Southend based Youth Club first caught peopleʼs att ention in May 2014 with their self - released debut EP ʻColoursʼ. It stormed the official independent singles charts reaching No. 25 and No. 7 in the iTunes alternative charts. They are the first unsigned Essex band to officially chart right next to Adele.

Since the release of their second EP ‘Brothers’ on Lab, these boys have been the band on everybody’s lips. Summer 2015 saw them grace the stages of Radio 1′s Big Weekend, Y Not Festival, Standon Calling, Beat Herder, Shazam Summer Party and Kopparberg’s Urb an Forest Festival; as well as gaining huge support from the likes of Idolator, TMRW Magazine, The 405, Radio 1, BBC Introducing, London Live, SubTV, MTV Rocks, MTV IGGY, Sunday Brunch and Made in Chelsea. 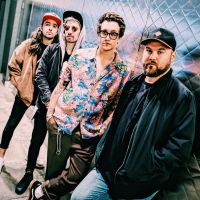 Are You Wanting It All