It began in an Exeter dorm room in early 2015 - Tudor was studying at the University of Exeter when he invited Skip, an old friend, down from Cardiff to write, record, drink and eat their way into some sort of musical collaboration. Unaware of any intended musical direction, Skip roped in Nick Kelly in hopes of bringing another dimension to the session. The three of them sat down and in a day wrote what would become ‘Low Tide’ – bringing with it the genesis of their unique style, later coined as ‘haze pop’.

Early demos began to take shape whilst all three lived across the country from each other - Tudor in Exeter, Skip in Cardiff and Nick in Reading. These early demos were later developed into the band’s first extended play, ‘Shimmer + Shade’. The self-released EP gained huge popularity on all online platforms, it was at this point the three had discovered that XY&O had somewhat unintentionally become a band, as they had been asked to play Glastonbury Festival 2016.

The success of Shimmer + Shade has allowed the three to move back to their hometown and focus on the upcoming releases of the Powder Rooms Volumes. 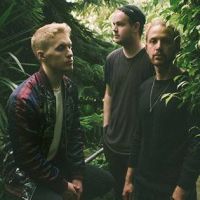