A self contained unit who write and perform their own material and produce it in their studio in South West London, They are thrilling new purveyors of quirkily rhythmic indie pop with an askew lyrical slant. They sing songs about plas tic surgery, drug ODs and auto destruction.

Formed in 2012, their songs are idiosyncratic yet accessible, largely observational, and wholly rhythmic and melodic. “Falling” tells of “late night chaos” in British Cities and “Easy” recalls the time they we re all simultaneously travelling the globe: Gabby in America, Archie in the former Soviet Union and Clement in Mongolia.

We are described as “alternative indie pop that you could file next to bands like Vampire Weekend”. Melody is key. Additional influence s include movies, and biographies “of people who have lived extraordinary lives and existed on the fringes of what’s considered normal”. WE-ARE-Z  destined to cause a stir with deceptively infectious guitar based pop. 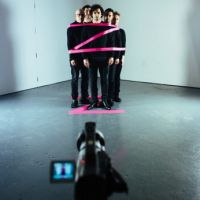