Centring on Violet’s remarkably nuanced voice, her songs that could only have been written and recorded echoing as they do with a thoroughly modern sensibility that exists between genres. There is much heart here.  It’s this relationship between the personal and the creative possibilities opened up by digital technology that makes Violet’s music so unique and fascinating.
The fact that she writes melodies a forgetful milkman could whistle helps too, of course!
As Violet herself puts it: “My sound balances a love for artists I grew up with, such as Joni Mitchell, Sting and Paul Simon, and the soundscapes of James Blake and Massive Attack”.
Violet is from Chepstow in Gwent.  She has played the Glastonbury BBC Introducing Stage, a headline London show, open for Grammy Award winners A Great Big World and release her EP, ‘Dragons’.  Violet’s tracks have been played by Huw Stephens on Radio 1, Jamie Cullum on Radio 2 and widely supported across BBC Radio Wales, and she has been featured in Hunger Magazine, NME and many online blogs. 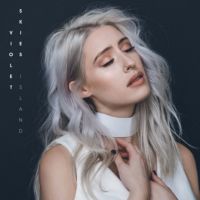