The Velvet Hands blend slacker story-telling with fierce guitar hooks to create unstoppable energy that has drawn comparisons to The Strokes and Parquet Courts.

The Cornish four piece have been described by Gigslutz as ‘Jaw droppingly good’ and by NME as ‘full of bolshy Spirit’.

The bands self recorded debut album went on to be Huw Stephens Radio 1 ‘Album of the week’, with John Kennedy of Radio X stating that ‘Every single they’ve released is an instant hit as far’. 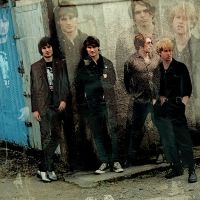