Amongst a hotbed of young talent in Scotland right now, Paisley quartet The Vegan Leather stick out not just for their ultra-on-trend band name, but for their willingness to engage directly with the increasingly absurd world in which they find themselves. Take recent single ‘I Take American’, an unapologetic sideswipe at the encroaching dominance of US media and artists into the lives of the rest of the world. For an early release, it’s a bold statement to make.

They just got finished playing as part of the bustling Creative Scotland showcase at Brighton’s The Great Escape, which also proudly featured stunning sets by acts including The Spook School and Bossy Love. It marked one of the biggest shows and longest journeys to date for The Vegan Leather. 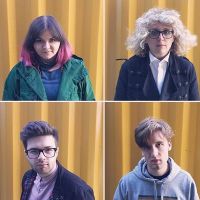