Thandii’s sound is bold and playful, and in her words “an attempt to put a female stamp on an otherwise male-dominated sound.”

Beginning with “Another One”, Thandii is taking a great leap forward. From the rippling harp, through the beats which cross jazz into disco, right into Thandii’s gorgeously echoing vocal and a wah-wah heavy guitar solo that’s right out of 1970s there’s music which matches where it was created. Not quite pastoral, but a natural feel which bends to the inevitable modern surroundings.

Thandii explains the new songs were all “created here (in Margate) and Graham and I were trying to bring in this element of easy-breezy, ‘70s dreamy kind of thing….all the ‘e’ words haha! But still kind of being experimental with the vocal placement or the drum sound…. there’s definitely more of a ‘70s psychedelic element to them.”

2018 starts with Thandii being chosen as one of Abbie McCarthy’s BBC Introducing Picks of 2018. 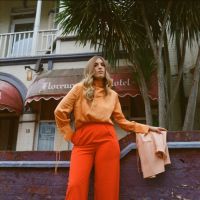