“Fusing together raw rock sounds and honey-sweet soaring harmonies, SuperGlu have created an instant hit; an energy-filled offering that will leave you ready for the weekend” – Gig Slutz
“A band everybody will be talking about by the end of this year” – BBC Introducing

With hooks stickier than their name, SuperGlu are national treasures in waiting. A regional champion disco-dancer, a reclaimed boat dweller, an abstract painter and a proclaimed pesto addict form a band. It’s the stuff of make believe, but the true story of Suffolk’s SuperGlu, aka bassist Krista Lynch, drummer Ben Ward and brother guitarists Benjamin and Alex Brown.

Since forming in Manningtree, Britain’s smallest town just two years ago, the punk-pop group have built a reputation as one of the UK’s best emerging live acts with a gift for hooks and harmonies.

SuperGlu performed multiple official showcases at SXSW 2017 in Texas, including Huw Stephens & Steve Lamacq’s showcase at the British Music Embassy. The group were also crowned Best Live Act of 2016 by GigSlutz. Single 'Simmer Down' was Huw Stephen's BBC Introducing Pick of the Week when released in April 2017. 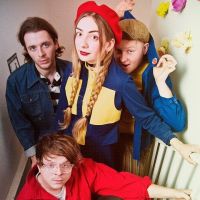