SPINN, formed of Jonny Quinn, Andy Power, Sean McLachlan, and Louis O’Reilly have been a band since 2015.

The band signed to ModernSky UK in August of 2017, through which they are releasing their debut EP on the 6th April.

Since the release of their debut single, ‘Home', and follow up track ‘Notice Me’, the band have played with The Sherlocks, Will Joseph Cook, Flyte, Ten Fé and Dream Wife.

They’ve also had slots at FestEVOL, Kendal Calling and Liverpool Music Week. Whilst having slots at Liverpool Sound City, 110 Above Festival and CloseUp Festival confirmed for 2018 with a host of others to announce.

During their prolific release schedule, the band have amassed over 1,000,000 streams on Spotify, and had support from Radio X, BBC Radio 6 Music and Amazing Radio. Whilst online they have had repeat support from Dork, as well as Tenement TV, A Music Blog Yea? and Fresh On The Net. 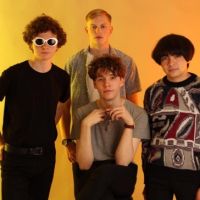