A product of the South Of France, between Nîmes and Montpellier far from any big city, Olivier Mateu grew up on the seaside during the 1990's where he oscillated between piano lessons and electronic music parties.

As one half of French electro act The Youngsters – best known for their two studio albums and singles for Laurent Garnier’s F-Communications , the Youngster's award- winning productions catapulted them into the international arena, taking them to some of the biggest clubs and festivals around the world.

His talents are however not just limited to the dance floor. When fashion brands Hugo Boss and Gucci sought out a more fresh, urban and organic identity, they called in Mateu to produce their music for the project.

Rodriguez Jr. reveals a different incarnation of Mateu’s musical psyche, one that strides ahead, guided only by his kaleidoscopic vision; moving through shimmering, contemplative electronica, to deep and urgent techno, left field melodic accents and quirky pop refrains.

As he restlessly seeks out the ultimate intersection between all of his disparate influences, Mateu explains it best: “Good electronic music is not a jail,” he says, “It should be enjoyable everywhere, from dance floors to living rooms, and by everybody.” 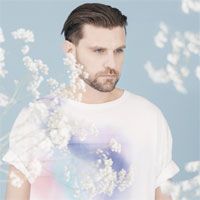 The heart is a woman