In 2016, having taken inspiration from Editors, Arcade Fire and Frightened Rabbit, Only Shadows had a huge year supporting the likes of Carl Barat, Coasts, Reef, Young Kato and more, as well as releasing their debut single, Be Still.

Fast forward and the Nuneaton group have exceeded their most lofty ambitions, supporting their heroes and notching up more than 400,000 Spotify plays.

'Fight Milk' lead the way for a feisty return, but Only Shadows sprinkled some pop sugar on top to match the bitter with the sweet.  The video finds the band performing in an abandoned warehouse, a stylised clip that shows that inherent chemistry.

'Cold Shoulder' is the next single for this exciting new band. 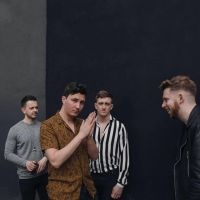