A staple band of Manchester’s underground alternative scene, New Luna continue to establish themselves as an act pushing post-punk and dream-pop music in a forward direction.

Tipped by Paste Magazine as one of the need-to-know Manchester acts of 2019, 2020 has seen New Luna make their US live debut with two shows at The New Colossus Festival in New York and record a live session for Paste in their NYC studio. 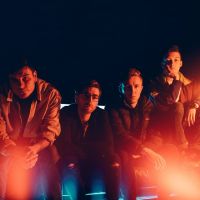