Monico Blonde are one of the UK’s most exciting indie-pop newcomers. Bursting onto the scene in late 2016, they have already been championed by BBC Radio 1’s Huw Stephens and Radio X’s John Kennedy, alongside featuring on BBC Music’s Best of R1 Introducing Playlist, and garnering critical acclaim in the media.

Their “blistering set is a maelstrom of squealing guitar solos and anthemic choruses” (God is in the TV), winning over crowds across the UK. In their first year, the band played Isle of Wight Festival, The Great Escape, and supported Coasts on a 20-date UK tour.

In 2018 is set to go stratospheric for the Monico Blonde. After signing with Kartel Music Group, the band premiered new single ‘Flowers On Tarmac’ on Radio 1 and VEVO, and announced a string of headline dates including London, Manchester, Bristol, Sheffield and Cardiff. 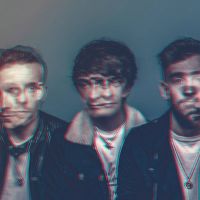 Love Is An Only Child