Born in Chicago, Marcus Vaughn known by his stage name MKV has always had a deep love for music. From an early age, he learned to appreciate music listening to records played by his mother from artists such as; Donny Hathaway, Bob Marley, Sam Cooke and the Chi - lites to name a few.

Marcus started out writing poetry in his teenage years but was heavily influenced by the golden era of Hip Hop. This inspired him to try his hand at writing his own lyrics while freestyling in his grandma’s basement in Pittsburgh, PA. Shortly after Marcus met mc Warren Parker, the two instantly connected from their mutual love for Hip Hop & music, they starting recording songs together at Warren’s house, and the duo had begun their journey.

After serving the army for three years, Warren & Marcus recorded songs together and decided to form the group “Lucid Music” upon Marcus’s honourable discharge from the army. They released their first album in 2005 called “Wake Up” and starting performing shows locally as well as New York. West Virginia, Chicago and Detroit.

They went on to release a total of 5 albums together, also being featured on the cover of their local city paper for the release of their 5th album “Rockit Science”. While in the group, Marcus began working on solo material, solo collaborations here and there until one day he ran across a producer named Roeg Du Casq – the two decided to release MKV’s first solo EP in 2010 titled ”I Was Made To Love Her” on a Japanese label “Root70Lounge”. A couple of years later MKV started conversing with producer Adamatic, the two first met through Lucid Music’s album; “Adventures Of The Invisible Band ” released on Bombhiphop. 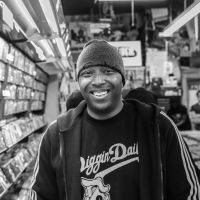