London-based vocalist, bassist and producer MEI was awarded the 'Do It Differently Fund' in December 2018 by Help Musician's UK, and has already garnered support from tastemakers such as EARMILK, Clash, Elevator, gal-dem and BBC Introducing London.

She landed a coveted spot on the FIFA 19 soundtrack and has performed with the likes of Brian Eno and Karl Hyde on Later With Jools Holland. 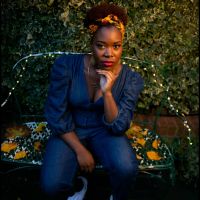