The Lottery Winners are a mob of four twits from a rubbish working-class town called Leigh, near Manchester.

They’re also probably the best live band in the country.

Their sound is an undeniably slick spin on contemporary Indie-Pop mixed with alternative rock riffs and even some Americana style Folk.

The band have toured extensively throughout the UK and Europe, filling venues and raising roofs where they have harnessed an ever-growing fan-base of loyal listeners. 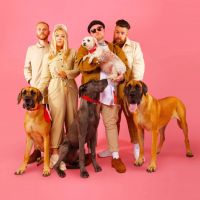