Mark Konstantinovic (Kovic) is a British singer-songwriter and producer, born and raised in Brentwood, Essex, to a Serbian father and English mother.

The track was picked up by the head music supervisor at EA and playlisted the FIFA soundtrack, catapulting Kovic into the biggest gaming placement of the year, notably joining the top 50 viral Spotify charts across a number of EU countries, and gaining millions of streams within months of release.

The debut album for Kovic was released in late 2018, featuring a contrasting collection of tracks from haunting ballads to summer infused BBQ playlist candy, “Running Underwater” continues to grow momentum on streaming platforms, as his live touring starts to make the upgrade from small acoustic rooms, to sold out clubs, it’s not long before we can expect arena’s to follow suit. 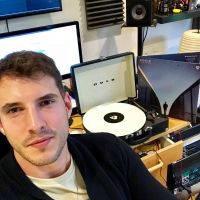