Keir's eclectic pop comes from a love of Patti Smith, Bowie and Debbie Harry; crafting a unique sound with a voice that sets him apart from the noise. Keir first caught the eye of critics after performing live for BBC Introducing at Maida Vale and subsequently gained traction at a series of unforgettable early live performances at The Great Escape, Secret Garden Party and Glastonbury, among others. Keir and his band, which includes his brother on percussion, supported cult US band, The Drums, which included a sold - out performance at Shepherds Bush Empire. He then followed with a London headline date at a sold out Waiting Rooms. January 2018 saw Keir tour Europe with his first headline European show taking place at the Sugar Factory in Amsterdam, followed by two slots at Eurosonic Festival.

His debut track, ‘Squeeze Me,’ was number eight in the Spotify Viral Chart. 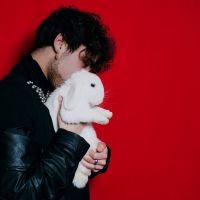