Since mid-2016 Birmingham's party provocateurs, Ivory Wave have grown from a gang of 5 mates playing dingy pubs/clubs in and around the city to local heroes selling out huge shows that erupt into a chaotic mix of sing-along frenzies & smoke bombs.

The band are carving out their own Indie, House style, adding synths to the dance beats and combining this with raw Brummie inflected vocals. 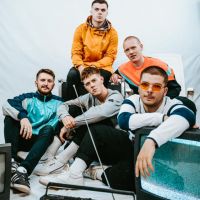