Imogen's debut single White Lines was premiered by Huw Stephens at BBC Radio 1 in 2018 and since then her feet have hardly hit the ground.

As an artist, Imogen's songwriting techniques are rooted in darker themes, but she also lends her charms to the delicate side of the spectrum.

Her music was recently described by The Line Of Best Fit as “the most affecting, nuanced piano and vocal cut we’ve ever heard” 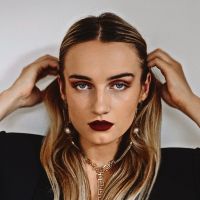 I Wish You Were Here