Comprised of twin sisters Brooke (guitar, lead vocals) and Brit (cello, backup vocals), Good Graeff came together to compete in a high school “Battle of the Bands.” Upon victory, the girls decided to bring their indie pop music to the streets of Sarasota, Florida, busking for tourists on the barrier islands. Beyond sharing the joy of in - the - moment creation (and some extra spending money), the girls never sought a music career. After high school, Brooke left for Toronto to begin a career in foley arts and so und editing, while Brit remained in Florida, attending UCF to study International Business and Marketing.

After coming back to the States, the sisters hit the ground running. With a successful kickstarter, the band funded an EP, acquired their tour van Roo sevelt (after Eleanor: “Do one thing every day that scares you.”) and embarked on a 3 - month tour throughout North America. The following year brought performances at music festivals small and large, including Coral Skies, Savannah Stopover, Gasparilla, SXS W, and Summer Camp, as well as opening slots with Mates of State, St. Paul and the Broken Bones, Shakey Graves, and the Plain White T’s. With the twins’ new EP , “Good Job Go” on the way, MTV premiered their first single “I Want That”, saying “Think we may have found our new favorite act of 2015.” Pair that with an increasingly exuberant live show, these girls are poised to breakthrough, and add yet another layer to their already exceptionally unique life - stories. 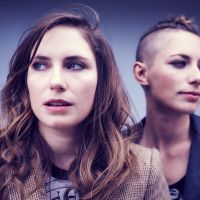