2016 was quite a start for London - based Aussie duo Geowulf ; the group broke onto the music scene with ‘Saltwater’, the perfect showcase of their unique electronic brand of lo - fi indie - pop, a sound that has earned the duo over five million streams on Spotify alone. Following up with dreamy ‘Don’t Talk About You’, the band made a name for themselves in the contemporary shoegaze/dream - pop world a mere few months after surfacing.

After an amazing start with their online career, Geowulf have begun to make a name for themselves live, hitti ng festivals such as Live at Leeds, Hit the North, show’s with Portugal The Man & two shows at this years The Great Escape in Brighton along with several spins on BBC’s Radio 1. 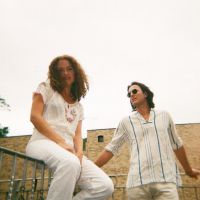