Of Sudanese and Scottish descent, Eliza Shaddad is a writer and performer of arresting ability; blending intricate guitar patterns with a stunningly forthright voice.

\Winding between blues, folk, and jazz, she has played across the UK supporting the likes of Michael Chapman, Rue Royale and Finley Quaye, and released her first record in March 2012 to first rate reviews, blog support and radio support .

As a vocalist and writer with the collective Clean Bandit she has appeared on their EP ‘UK Shanty’, and subsequently Channel 4, XFM and Radio 1, in addition to live dates supporting Redlight, Rudimental, Sbtrkt, and in January 2013; Mercury Prize winners Alt-J at their sold out Shepherd’s Bush Empire shows.

In June 2014 Eliza Shaddad released her 2nd EP ‘Waters’ through London - based indie label, Beatnik. The EP quickly grabbed the attention of the music press, and gained airplay on BBC 6 Music, XFM, BBC I ntroducing and Amazing Radio.

“Haunting acoustica, with a hint of menace”
The Sunday Times 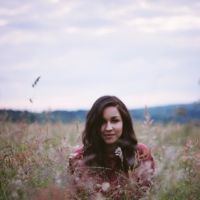