If you’ve never heard of folk and blues duo Ferris & Sylvester, that will simply not be possible for much longer. Balancing on the verge of something spectacular this London based band are growing in popularity by the day and making beautiful music which demands and deserves an audience.

Having been old timers at the Spiritual Bar in Camden, Issy Ferris and Archie Sylvester then released the four track EP The Yellow Line as well as songs including Better in Yellow and The Room which highlight their backgrounds in folk and blues. These songs are carried on a beautiful harmonica tune which fans of old country music cannot help but fall head over heels for.

Newest single London’s Blues was released at the start of 2018 and has already seen insane success gaining over 92,000 streams on Spotify in its first ten days. And with another EP, Made in Streatham, due early February it really seems as though there is no stopping the magic. 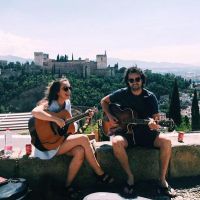