Based in Manchester, 4 piece indie band Delights formed in 2017 having previously been in bands together in high school.

Their sound is inspired by an ever growing catalogue of music ranging from Kula Shaker to Chaka Khan, seeing the band merge their own blend of dreampop with hints of classic indie rock, dubbed as “kaleidoscopic guitar janglers”.

In 2020, Delights continue to push their musical adventure where they sell out headline shows in Manchester and have an ever national growing audience. 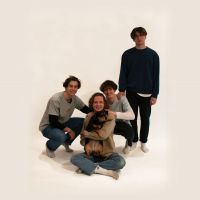