Murky and shimmering like a fairyt ale swamp, Da hlia Sleeps’ track ‘Black and Blue’ hides fantasy beneath its melancholy.

It’s a second step from the South London group that links up with debut track ‘Breathe’ in dragging modern pop out of the laptop and into another dimension.

As tender as its title mi ght suggest, ‘Black and Blue’ is pinned around Lucy Hill’s defiant vocal – where other groups feed off similar influences and bury them beneath a camera - shy, navel - gazing aesthetic, Dahlia Sleeps take the money and run.

Energetic and confrontational, it’s a to - the - point take on futuristic pop that touches base with everything from The xx’s watercolour melodies to the hop - skip steps of Aluna George along the way. 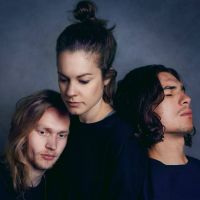