Drawing influence from a spectrum of genres including funk, hip - hop, disco, grime and rock, Courts have cemented themselves as musicians who’ve defined an individual sound and found fans in Zane Lowe, MTV and Nile Rodgers.

With so much impressive support under their belt and a string of amazing releases, videos and shows planned for the coming year, Courts continue to pave the way as an up and coming act to keep a close on eye for the future. 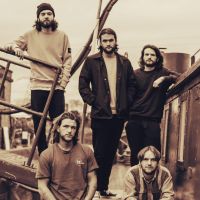