Sheffield MC and producer COCO has been steadily championing the grime scene since he crash-landed into the limelight in 2015.

His rugged edge and catchy quips are splattered across the airwaves with and unapologetic delivery, colourful character and undeniable energy.

COCO has performed/collaborated with some of the UKs most iconic artists, including Stormzy, Toddla T, AJ Tracey and has been featured everywhere from Noisey to Complex. 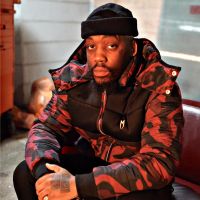