Led by siblings Joe and Helen Hammill, Cattle & Cane can shift even the hardest of hearts with their perfect, soaring harmonies. Joined by their brothers Fran (guitar & backing vocals) and Vin Hammill (bass), along with close friend Tom Chapman on drums, Helen and Joe’s finely crafted indie pop showcases kind of mesmerising harmonies which are truly synonymous with family.

With extensive national support from the likes of BBC 6 Music, BBC Radio 2, BBC Radio 1, Amazing Radio and Channel 4′s Sunday Brunch, Cattle & Cane have been heavily championed by the BBC Introducing team and performed at T In The Park and BBC Radio 2 Live in Hyde Park before they’d even released their debut single.

The band’s music has also been featured on a variety of TV shows including Made In Chelsea, The Only Way Is Essex and MTV’s Catfish, as well as on popular Brazilian soap - opera Avenida Brasil, where they were included on the show’s official soundtrack alongside the likes of Taylor Swift, Adele and Paul McCartney. 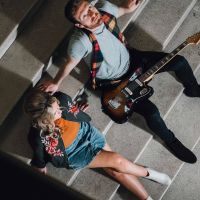 Love On Your Hands