South London based CALM, are an alternative band that hit the internet in late 2018 with their debut track ‘VIVID’ which received wide spread acclaim and support from BBC Introducing including plays on BBC Radio 6 music.

Their no frills rock and roll is a fine tuned blend, crafted solely with the purpose of turning heads in the modern day, something echoed in the rapid expanse of their loyal fanbase.

Contrary to their name CALM, you can expect anything but tranquility on stage and in the music. 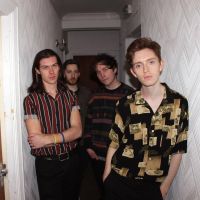