Taking the stylistic edge and gripping riffs of grunge and indie whilst applying a melodic pop feel, BLOXX are the London based quintet rising to the fore. Their band members include drummer Mozwin, rhythm guitarist ad singer Ophelia, Taz on lead guitar and Paul playing bass.

After announcing their arrival to the world with the release of their pensive single ‘Your Boyfriend’ in 2016, last year saw a massive spurt of productivity as they directed their considerable creative energies into bringing out a string of singles including the anthemic ‘You’, ‘Curtains’ which displays more of a rock edge and the appropriately additive ‘Coke’.

Now they blast off the year with the brand-new song ‘Novocain’. Building on the bands former forays into disco centred rock, their latest offering is a confident display of a band which both knows what they want to sound like and how to perfectly execute it. Benefitting from high production values, ‘Novocain’ proves how less can be more by restricting the lyrics to be easily repeated and the classic quiet verse / loud chorus for maximum effect. 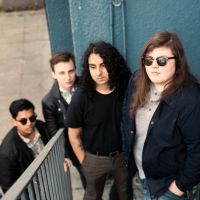 Back to artists
Previous