Best Girl Athlete has been born out of the non-conventional manner in which many people now consume music; collecting individual offerings, rather than whole albums. Consequently each song here stands alone as a single offering with lyrically intriguing, musically accomplished depth that will draw on audiences from across the board.

By the age of sixteen years, Katie Buchan had already toured the U.S and Europe and released an album that was nominated for a Scottish Alternative Music Award. Carve Every Word was named the second best Scottish album of 2015 by Ravechild and received acclaim from the likes of The Line of Best Fit, Clash Magazine, Folk Radio, Artrocker, The Sunday Herald and BBC Radio Scotland’s Vic Galloway and Roddy Hart. One can only imagine what the future will bring for this young artist, but it looks certain that this innovative new album is sure to propel her even further forward. 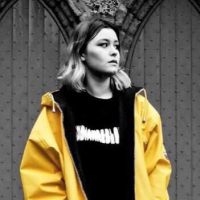