April + VISTA are the odd ones out, toting a cinematic sound that whisks listeners into a world of their own.

They pull from a wildly eclectic range of influences, fusing electronic soundscapes and lush string arrangements with rich textures and mesmeric storytelling.

The duo’s dynamic live act has taken them around the world as they’ve toured with heavy-hitters like Little Simz, Little Dragon, and GoldLink.

Racking up over 6M Spotify plays on their debut album "You Are Here", the pair have laid some seriously solid foundations for a star-studded career in the making. 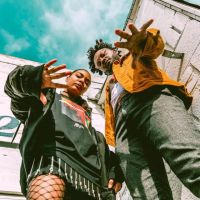