One of the most talked about artists of the new rising Irish music scene, and drumming since the age of 6, he quickly became a well-respected master of his craft and soon turned his hand to producing, while also attending the prestigious ‘Cork School of Music’.

2018 saw his first proper outing as a solo artist with the experimental ‘The Infomercial Tape’ EP and hugely popular ‘Afraidofmoney’.

His music is currently turning heads nationwide racking up millions of streams and pulling in new fans as far as America. 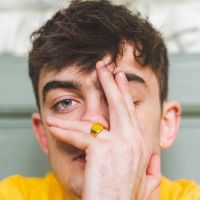