From São Paulo, Brazil, the band’s name is a tribute to their uncle Aldo. He was a crazy dude from the 80’s who took his nephews on a crazy Fear And Loathing in Las Vegas style adventure when they were young.

A mix of eletronic beats, synths, bass and guitars, the band has tailored their sound for the nightclubs they grew up in.

Aldo liken their sound to the Happy Mondays, Prince, Chic, LCD Soundsystem, Chemical Brothers and some brazilian soul and funk bands from 70's, like Maria Fumaça and Eumir Deodato. 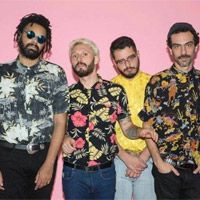 The city is waiting